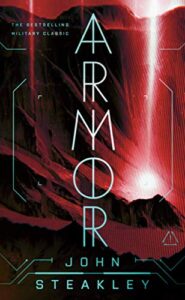 One of the most common subgenres of Science Fiction is the military sci-fi...particularly where humanity attacks an alien planet, made most (in)famous by Robert Heinlein's Starship Troopers.  Steakley's novel Armor, I would argue, follows much of the same concept, but is in my opinion even better than Heinlein's.

The novel follows the experiences of Felix, a power armored scout, as he survives more combat drops than any other soldier on a hellish planet called Banshee.  What truly differentiates this story from Heinlein's, though, is the attention given to the dissociation some soldiers experience in combat which allows them to turn into killing machines (which Felix refers to as "The Engine"); the novel also looks at the psychological and emotional trauma which goes with prolonged combat, as well as the political/administrative incompetency which allows Felix to fall through logistical cracks.

For authors looking to write in the Military Science Fiction subgenre, I highly recommend picking up this book as a companion to Starship Troopers.  The pacing of the first half of the book, the description of the technology, and the somewhat less-than-subtle critique of military/political structures are the true takeaway example for how to write in this category. 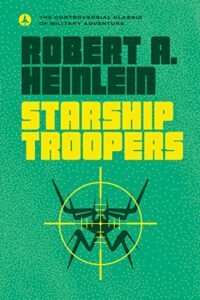 First thing that needs to be made clear with this recommendation is that the book has almost nothing to do with the movie adaptation beyond a few small elements.  That being said, having both the book and the movie should be essential to any authors looking to explore the Military Sci-Fi subgenre.  Starship Troopers is the granddaddy of military invasion sci-fi fiction, and that is what makes it an essential piece.

Starship Troopers focuses on Jonnie Rico as he trains for the infantry and eventual combat against the Arachnids.  The battle scenes are pretty fierce but somewhat dry and, in my opinion, the characters feel kind of flat - but appropriate for the context.

However, the important element that should have this on every writer's bookshelf is the way controversial material about militaristic elitism, fascist concepts, gender, and other topics are handled.  It is important to remember that the book was published in 1959 - just after the end of the Korean War and right before the US entered the Vietnam War.  The pro-military tone and many of the concepts discussed in the book were very much counter to the growing antiwar sentiments and changing social dynamics of the US; as such, it is an excellent resource for authors who are interested in exploring an unpopular perspective counter to modern social issues. 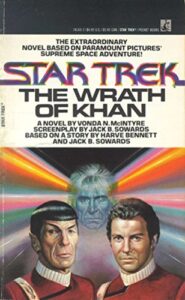 Obviously a novelization a movie by the same name, I recommend the book as well as the movie for several reasons - not the least of which being that the movie, despite being released in 1982, still holds up against modern sci-fi movies (though I recommend the Director's Cut over the Theatrical).

A continuation of the story originally told in Star Trek's television episode Space Seed, the story follows an unhappy Admiral Kirk as he oversees a trainee training cruise on the more-or-less decommissioned Enterprise.  Khan - a genetically engineered superhuman - escapes exile imposed on him by then-Captain Kirk, and commandeers another Starfleet vessel to pursue his vengeance against Admiral Kirk.

The reasons I recommend this book/movie is because it successfully adapts Herman Melville's themes in Moby Dick regarding ambition and vengeance.  Additionally, while we can debate the merits of Star Trek's social commentary ad nauseum, Wrath of Khan shines where Star Trek generally does best - the exploration of themes related to aging characters.

Even more importantly, however, both the book and movie are excellent references on how to write starship combat.  When combined with stylistic themes from other books on my recommended list, such as Armor, there are really strong examples of action writing which, when combined, could dramatically improve the quality of a sci-fi military narrative. 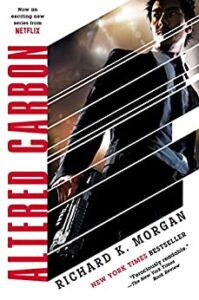 Altered Carbon is a novel that fits best under the subgenre category of Cyberpunk.  The book follows Takeshi Kovacs as his consciousness is downloaded from storage and "resleeved" into someone else's body, where he is then engaged in trying to uncover who is behind a rich man's death.

I recommend this book because it is one of the better examples of Cyberpunk - which tends to be a gritty answer to Star Trek's more optimistic outlook on humanity.  If you're a fan of Grimdark as a subgenre concept, Cyberpunk generally shares the same sense of overall pessimism and futility as a critique of humanity in general.

The exploration of themes of economic disparity and corporate influence on legal and political operations are the true takeaways from the novel, as are the discussions of social, racial, gender, and economic inequities.  The coritcal stack, the device which allows consciousness to be transferred from one body to another, is a plot device which further illustrates the issue of economic disparity between classes, genders, races, and philosophies.

New writers to the sci-fi genre would be well-advised to have a copy of this on their shelf. 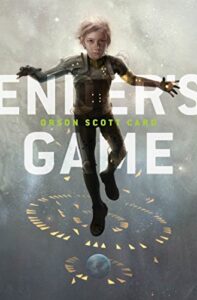 Leaving aside any discussion of Card's social and political beliefs, for which there is much criticism easily found through a Google search, I still recommend this book for any writer in general and science fiction writers in particular.  As writers, I feel it is incumbent upon us to read major works even if we do not necessarily agree with the author's position.  If there is an issue with paying for a book because of those political/social stances, there's always the library or borrowing a copy.

Ender's Game focuses on the child character Ender Wiggin as he is trained for strategic combat against the Formics, an insectoid alien species who has attacked Earth twice.  Through a series of war games as part of his training, Ender becomes embroiled in a preemptive campaign to head off what is believed to be an impending third invasion.

There is a reason that this book is on the Marine Corp's and other military recommended reading lists - it discusses themes of leadership, ethics and morality, technology, authority, manipulation, and more.  One one hand, there are many positive ways to interpret the themes of the book; at the same time, there are questionable interpretations - particularly when it comes to rationalizing violence, manipulation through authority, militarism, and especially the concept of indoctrinating child soldiers and exploiting their aggressive tendencies.

Regardless of whether you agree or disagree with Card's positions on a variety of topics - which can easily be found online, along with criticism - Ender's Game is, I feel, an essential item in any sci-fi author's toolkit when it comes to learning the craft of telling a morally complex story.  Additionally, the controversy surrounding the author is a case study of what could happen should an author strike literary gold and be subjected to personal scrutiny.